Photo of the week: Welcome to our new CCS Honours students!

Email ThisBlogThis!Share to TwitterShare to FacebookShare to Pinterest
Labels: Honours, Photo of the week

Save the date! The second Australasian Brain Stimulation Conference is to be held July 28-29 this year in Melbourne.


See absmeet.org for more info, to submit your abstract and to register for the meeting!

Abstract Submissions close 15 April 2016
No comments: Links to this post 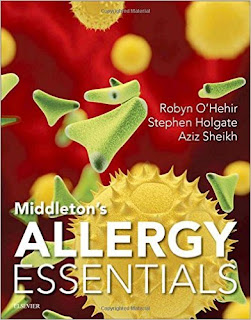 Professor Robyn O'Hehir (Director, Department of Allergy, Immunology and Respiratory Medicine, Alfred & Monash) and her international co-authors have published a book of comprehensive information on allergic disorders for medical practitioners. Middleton’s Allergy Essentials, by Professors Robyn E. O'Hehir, Stephen T. Holgate, and Aziz Sheikh, offers a concise resource that is both easily accessible and highly authoritative. Perfect for clinicians in primary and secondary care settings, this practical volume covers what is most useful in your daily practice, with a strong emphasis on disease diagnosis and management.

Interactions of bacterial and fungal pathogens in humans

Multi-drug resistant bacteria strains are becoming an increasingly serious problem within a clinical setting. One type of bacteria that can rapidly acquire antibiotic resistance and cause problems in humans is Acinetobacter baumannii. Often A. baumannii is found alongside the fungus Candida albicans which can cause yeast infections, especially within intensive care wards.

Monash researchers led by Professor Anton Peleg from the Department of Infectious Diseases and Microbiology had previously noted that A. baumannii and C. albicans were able to inhibit each other’s growth under certain conditions. To explore this interaction further, this study sought to understand the molecular mechanisms behind the inhibition of growth of A. baumannii by C. albicans.

Farnesol is a compound secreted by C. albicans continuously during its growth. This compound was shown to be able to inhibit growth of A. baumannii. Farnesol, upon further investigation, was found to interfere with gene expression that was responsible for maintaining the cell membrane and controlling cell division of the bacterium. The ability of the bacteria to create a biofilm (many bacteria adhere to one another in a protective layer) and move were also greatly impaired by farsenol secreted by C. albicans. This means that the infectivity of A. baumannii was greatly reduced.

This study of bacterial-fungal interactions has increased the understanding of how C. albicans can inhibit the growth and viability of A. baumannii. As such, this study concluded that by understanding how pathogens can compete with one another may allow for the identification of novel antimicrobials for the treatment of problematic human pathogens.

Researchers at all levels are invited to apply and submit images featuring the amazing immune system as part of the 2016 Day of Immunology activities. These can be histology, confocal, laboratory scenes, public health related, and everything in between. Entries close 28 March

Mary Ajamian is a visiting Fulbright scholar with the CCS Department of Gastroenterology.  She is investigating the mechanisms behind the neurobehavioural effects of gluten. She recently presented at a Fulbright Presentation Event, where scholars had the chance to meet Australian as well as American leaders, celebrate their accomplishments, and present their research to the community.

Media mention: "Well worth the weight" on outcomes of high volume bariatric surgery in the public system

Bariatric surgery has not been widely used in the Australian public health system. As obesity is strongly associated with socio-economic status, excluding its use from the public system will deny many of the most in-need access to a potentially very effective treatment. Alternatively, with rigorous follow-up and behavioural change requirements, highly successful outcomes in the private system may not translate to the public system. Patients were older, heavier and suffered more co-morbid disease than previously reported cohorts. This article by Monash-Alfred researchers concluded however that for the first time, excellent outcomes across a range of key quality domains in a large patient cohort have been reported in the public system. High-volume bariatric surgery in the public system is viable.