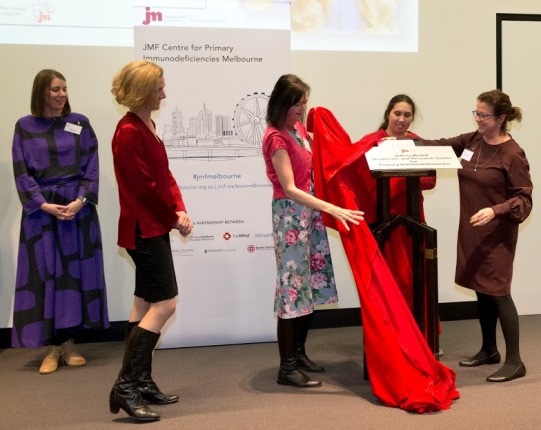 A full gallery of photos from the day can be found here.
For more information on the JMF Centre Melbourne, please visit their website www.jmf-melbourne.com
No comments: Links to this post

CCS staff and students can see details of both public and local events (including professional development courses, trade fairs and Graduate Research Student calendars) and deadlines, at the CCS intranet's Announcements page.

On Thursday 2 August 2018, Central Clinical School and the School of Public Health and Preventive Medicine will hold an information night for prospective honours and post graduate students. The night will showcase research being performed across the two schools at the Alfred Medical Research and Education Precinct (AMREP).

Supervisors and students at AMREP are encouraged to attend as a chance to meet with potential students and discuss research opportunities for 2019.

Recent publications for Central Clinical School affiliated authors in the following departments. Note, browse down this entry for complete publications list. Linked headings for each section are to the departments' home pages.

Perimenopause or the transition into menopause is a time when women are at increased risk for new onset depression, as well as relapse of depression. Perimenopause is diagnosed clinically and includes the time immediately preceding menopause, when women can have varying menstrual cycle lengths, and ends one year after the final menstrual period. This is usually during the mid- to late 40s, and typically continues for about four to five years.

Australians travelling to Bali would probably be familiar with the term “Bali belly” but while gastroenteritis or diarrhoea is a common illness for tourists they may not be aware that trauma and animal bites also pose a significant risk.

Now Monash University researchers have studied the spectrum of illness Australians bring home from the Indonesian island to better inform travellers on health risks and to assist clinicians in pre- and post-travel evaluations.

Congratulations to Dr Kevin Gillinder for his grant from the Ruby Red Foundation to work on genes causing blood cancer!

Dr Kevin Gillinder is in Professor Andrew Perkins' research group at the Australian Centre for Blood Diseases, Monash University, He is investigating the role of JAK2 gene mutations in causing blood cancer.

JAK2 is one of the acquired gene mutations found in MPNs and people with this mutation have a higher risk of developing AML. Looking at the genetic sequences of people with MPNs may help to identify a target for treatment of myelproliferative neoplasms (MPN)s. Patients live with debilitating symptoms and harsh side effects, as current treatments aim to reduce the risks of bleeds or clots but do not prevent the risk of disease progression to acute myeloid leukaemia (AML) or myelofibrosis and there is currently no cure.

“The focus is on supporting research that will have a direct impact on understanding the drivers of disease progression inMPNs and identifying new targets in the pursuit of breakthrough treatments” said Dr Laura Issa, Non-Executive Director for The Ruby Red Foundation.