Why I fight fires

Some of you will be familiar with Anne Crawford, who writes many of our blog posts. Anne is also a volunteer fire fighter with the Country Fire Association, and recently spent time fighting the serious fires in Bunyip, east of Melbourne. We invited her to share her experiences..


I joined the CFA because the farmer next door asked me. As simple as that. That was more than 10 years and two campaign fires ago, the 2009 fires and Bunyip.

Being a fire-fighter isn’t always about battling the blazes you see on television. Yes, there are times when you’re so pumped full of adrenalin that you work at a fire for hours on end without noticing the 40 deg. plus heat but they’re the minority.


There’s Tuesday night training, Sunday morning roster, meetings, fund-raising for brigade equipment and courses that span weeks after-hours and on weekends. The courses, some mandatory, some optional, cover topics such as wildfires, structure fires, first-aid, hazardous materials, hazardous trees, fire-line safety, pump operation and chain-sawing. The end of one advanced course on bushfire behaviour, complete with a heavy duty talk from a Bureau of Meteorology staffer, brought back vaguely unsettling memories of being at university and cramming before an exam.

Learning about fire science and fire behaviour is fascinating.

Fires can follow rules – every 10% of upslope in terrain doubles the rate of spread, for example – but the variables involved can combine to make them utterly unpredictable and erratic. The complex interplay of factors includes; vegetation type, fuel load, aspect, elevation, relative humidity, temperature, wind speed and direction, time of day and atmospheric stability. Fires can create their own diabolical weather conditions and as happened in the Bunyip fires, can actually run against the wind.

The turnouts we go to aren’t all for fires. There are motor vehicle accidents, occasionally with fatalities, but more often the task is to hose down roads after minor collisions. You might get up in the dead of night to the sound of the pager, groggy with sleep, to drive to the station, don the uniform and head out to what turns out to be a false alarm. Or arrive at the scene of a reported fire to discover the ‘smoke’ was due to a driver doing donuts on the road.

It’s fires like Bunyip that bring home why you do it. It’s where the training kicks in, the camaraderie comes to the fore and your skills are best put to use.

The sight of a towering column of smoke over the Bunyip State Park as we arrived at the Nar Nar Goon staging ground brought a sense of awe and dread, and a sickening feeling about what was happening to life below it. Majestic but treacherous. There’s a wait as those in charge strategise. The tanker then patrols a property rimmed by slowly burning bush for hours on end as you watch for signs of spread. It becomes mind-numbingly boring. Then a slight wind springs up at night turning the slowly creeping forest fire into a crackling, flaming beast spitting spot-fires ahead of it. The fire-fighters swoop, the house survives.

But not always. Another time we roll along dirt roads blacking out smouldering heaps, passing the inexorably sad sights of damage caused the day before. A brick chimney stands incongruously among the charred tangle of what was once someone’s home and life; hungry cattle huddle on patches of unburnt ground, singed wallabies look dazed and confused.

Being a volunteer fire-fighter gives you a feeling of being involved in something bigger than yourself and your daily concerns. Of being part of a collective, egalitarian effort where you feel you’re helping others and where you’re valued for just doing your bit.

Being part of a small brigade that punches above its weight makes you proud. Support from the wider community heartens you. A hand-written sign in a paddock that just says ‘thank u CFA’ buoys you after a long, uneventful day combing burnt areas looking for ‘hot spots’ left by the fires which might (but don’t) flare and spread. 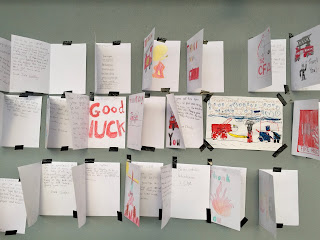 The message from Monash Vice-Chancellor Professor Margaret Gardner AO extending support to families in fire-affected areas and to staff who are emergency service volunteers was a welcome vote of appreciation and an acknowledgment that it was okay to take time out during these unusual times. My supervisors too, readily and generously made allowances for delayed work. It all took the pressure off trying to fit in writing around sometimes 16 hour days away from home and then trying to concentrate amid the exhaustion that followed.

Being prodded into volunteerism that day in June 2008 has opened up experiences and opportunities I would never have imagined. Being a ‘vollie’ can take many forms, I can’t recommend it too highly.